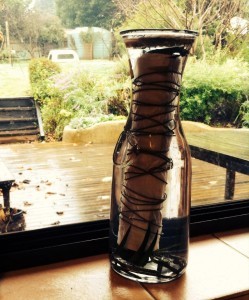 Given the Cycles & Spirals: a Lunar-Solar Journal is so new, I feel like it may be useful to document examples of using the journal, in the hopes that doing so may help you ground this form of reflection in your own life, but also inspire other ways of using it.  Hope you can make it work for you!  Please add your thoughts and experiences in the comments!

This week I found bits and pieces of time in which to use the Lunar-Solar Journal to reflect on the past month – an evening to map out what had happened during the cycle, and an early morning the following day, before the kids were up, to continue this reflection process and engage in a creative response.

Piecemeal time is valuable!  One can accomplish much in half an hour!

I was very interested to see themes arising multiple times throughout the month.  In particular, an ongoing struggle to reconcile two opposing aspects of myself – a lifelong task as a human being, I believe!

The theme was visible on paper, arising just before the Full Moon in an angsty way, and then again, in a more peaceful form just before the Dark Moon – opposites even on the page!  I take heart in this kind of symmetry, seeing it as evidence of living in the Flow, which helps me trust that answers and strength to change will come as and when I need them.

In the stillness of the morning, after playing poetically with what my cycle had held, I could see these experiences as an invitation to priestess a Sacred Marriage within myself, not a bringing together of opposites into a bland midpoint, but rather, being with these opposites ongoingly, understanding this as a sacred task, rather than evidence of failure yet again.

Later that day, I was listening to an audiobook in my car, and the author spoke of a letter from Jung written to a woman regarding this very theme of opposites:

The one must exist, and so must the other.

There can be no resolution, only patient endurance of the opposites which ultimately spring from your own nature.

You yourself are a conflict that rages in itself and against itself, in order to melt its incompatible substances, the male and the female, in the fire of suffering, and thus create that fixed and unalterable form which is the goal of life.

Everyone goes through this mill, consciously or unconsciously, voluntarily or forcibly.

We are crucified between the opposites and delivered up to the torture until the “reconciling third” takes shape.

Do not doubt the rightness of the two sides within you, and let whatever may happen, happen…

…The apparently unendurable conflict is proof of the rightness of your life.

A life without inner contradiction is either only half a life or else a life in the Beyond, which is destined only for angels.

But God loves human beings more than the angels.

And in holding these opposites, in “being with” myself – midwifing myself! – a new way of being  can arise.

Jung called this the reconciling third, or the transcendant third:
“Jung refers to the transcendent function as the mediating force between oppositions within the psyche.  The transcendent function arises out of intense and concentrated conflicts within the individual.  Like the koan of the Zen masters, extreme and painful paradoxes can lead us to a place where we must transcend the ego so that our perception of reality is no longer split into two opposing forces.  Jung says that holding the tension of the opposites is essential to bridging the gap between ego-consciousness and the unconscious.  If the tension between the opposites can be held long enough without succumbing to the urge to identify with one side or the other, the third, completely unexpected image, one that unites the two in a creative new way, comes into view.”  (from here)

This is my seed from the Aries New Moon cycle, which informs the current (Taurus New Moon) cycle:
“I am host
to a Sacred Marriage
of archetypes

these seeming dualities
coming together
in this priestess body

I wanted to respond to this emergent knowing creatively, so I wrote these words with greylead on some watercolour paper and laid leaves around the edges.  I layered tracing paper on either side of the paper and leaves, rolled the bundle up around a piece of dowel  and wrapped it with wire I’d found earlier when picking the leaves.

I found some old rusty screws and nails, placed them in the bottom of a carafe, and added my bundle – my seed! – and poured boiling water over the top.

Lastly, I sealed the carafe with wax from a candle (not sure if this is necessary, but I felt like doing it.)

I haven’t ever done this kind of solar dyeing before, and have no idea whether it will “work,” but whatever happens, I know it will be an opportunity to further reflect on these themes I am journeying with.

My plan is to leave it on the windowsill for a while, and open it at the Full Moon, where it can shed new light on my seed.  A fractal of how the Full Moon illuminates our life in general!

What I want and need to do, now, is write up some of my playful reductions and creative possibilities and stick them somewhere visible (for me, that’s the toilet wall!), because they are such a clear pathway to a new way of being in the world.  I find it so helpful to see them written down, in order to keep engaging with them.  They capture old ways of being, bringing mindfulness to familiar triggers.  And they capture new neural pathways, bringing mindfulness to a shifting identity.