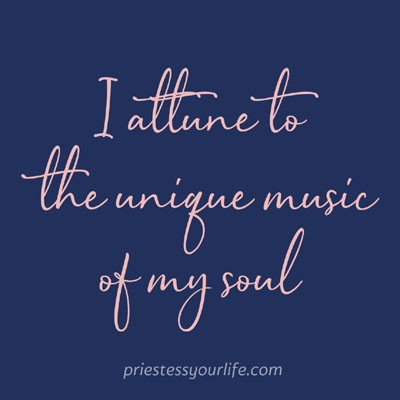 If you’d prefer to listen to today’s astro insight, you can catch it here (and I’d love to hear your feedback!):

I attune to the unique music of my soul.

Non-rational, highly intuitive capacities infuse our physical, embodied experience.  It’s how we can be Creators, manifesting something where once there was nothing.  New life, born of the womb, is one of the most magnificent expressions of this principle, nothing short of miraculous, yet so ubiquitous!

Today, let’s be fully-feeling participants in this ongoing conversation called Life, listening for the Song that wants to flow through us, expressed in our own unique voice.

Our Way-Shower, who embodies this ‘Pisces Sun + Pisces New Moon’ energy that we are journeying with today, is Erykah Badu (born 26.2.1971)

Erykah Badu is an American singer-songwriter, record producer, activist, and actress, the “queen of neo-soul.”  She points us towards the creativity and artistic Dreaming of Pisces.

“Music was a big part of my life,” she says. “We had a radio in the bathroom of my maternal grandmother’s house that never went off.”

“My paternal grandfather bought me a piano when I was seven years old. No music lessons. Just: ‘Here’s a piano.’ And I was able to get up on it and write songs. I think I wrote 20 songs in the first week.”

Creating something from nothing requires us to be the bridge between the known and the unknown, to channel a particular aspect of cosmic possibility that currently exists only in the realm of imagination.  Music in particular taps us into the ‘womb’ energy of Pisces, sound being the first language we experience in utero.

“I don’t watch a lot of television,” (Badu) says. “I have my own world, I’m always creating something.”

Badu has used her art as an activist, to raise awareness over racial issues and challenge mainstream thinking.  She has been criticized for living in a bubble, for operating outside of ‘politically correct, such as In the video clip of her 2010 song ‘Window Seat’ she strips naked (in real time) in downtown Dallas, falling to the ground at the site of JFK’s assassination

Having both Sun and Moon in Pisces means these two key players in the natal chart share the same tone or viewpoint.  This makes for incredible alignment, but can also point to a lack of perspective which can be troublesome.  It can be difficult to perceive and value other ‘ways.’

There’s no loyalty to the status-quo, but rather, a loyalty to the Dream that whispers from deep within, or from the edges of consciousness, about how things could be.

Pisces’s need is to commit to the Dream, to work towards birthing it in the world.  And double Pisces medicine adds a single-pointed focus to this task.

Badu became pregnant with her first child a month after her debut album, so part of this huge and compelling drive to express herself as an artist has meant she’s found ways to incorporated her children into life on tour, right from the beginning.  And what an immersion for them – all-encompassing, in the way a big wave is…

Badu established her own charity organisation in 1997 “to provide ‘community-driven development for inner-city youth’ through the use of music, dance, theater and visual arts,” as well as renovating and reopening a theatre to serve “as a community center, bringing people together in order to celebrate the art and culture of south Dallas.”

She embodies her Dream for a world where people are free to create, to express their unique voice, their unique connection to the Whole.

“Following your heart also means eliminating the things that no longer evolve you.”

“That’s the moment I learned that the more you believe in yourself, the stronger the vibration touches someone else, and things begin to happen the way you dreamed that they would.”

Happy International Women’s Day to those entering the 8th of March!

What was once perceived as ‘weak’ and ‘worthless’ – women’s embodied experience – is ever so slowly being sung up as valuable, and women, other minority groups, indigenous peoples and the Earth –  traditionally viewed as suspect and inferior – to the point of non-existent – are the new Teachers.

Today let’s celebrate the diversity of our experience as those who identify as Women, and when we encounter something we find difficult in another sister, let’s take a moment to own these qualities within ourselves, and/or to name the gifts of these Shadows.

I attune to the unique music of my soul.

Music on audio recording: Convergence, by Pictures of the Floating World